Back down the rabbit hole – lunch at The Fat Duck

Seven years ago, not long after I started working in the wine trade, my then-Manager of the Oddbins shop I worked at announced she was leaving to head back to her native New Zealand. And before she left England, she said, she wanted to visit the Fat Duck. Now, I have to confess that at the time the name itself meant little to me other than vaguely knowing that it was meant to be Very Good and Very Expensive. But as I had few responsibilities to spend my rather minimal wages on and (lets be honest) have always enjoyed a good meal out, I said I would go with her. As it turns out one of our other colleagues decided to come along too so it was the three of us that hopped on the train from Paddington one morning bound for Maidenhead, and beyond there – Bray.

And suffice to say, it was simply magical. Actually going there with no preconceptions – or indeed any real idea of what expect – made the whole theatrical experience so much more thrilling. It was easily the best meal I had ever had, both in terms of the food and the overall experience – and is a meal that has stayed with me ever since then. I fear I may have mentioned it rather more times than I possibly should have over the last 7 years to my friends and family, but such was its impact.

Fast forward 7 years to a room where we three monkeys were heads bent, pens scribbling, studying as hard as we could for our forthcoming exams. Then up came an idea – we needed something to look forward to post-exams, a big treat, something to work towards. “The Fat Duck!” one of us said. And so we decided to save our pennies, eat Pret sandwiches during our study evenings rather than visit Planet of the Grapes (our favourite study night location) and look forward to a decadent lunch at the Fat Duck. And of course, for Alex and I, the fact that Rémi who we got to know and had so much fun with on our Australia trip is Assistant Head Sommelier there was just the icing on the cake.

This Saturday the day we had been waiting for came around. And there I was back at Paddington station with two good friends heading back to Bray. I have to admit to a slight nagging worry – would this trip live up to my earlier visit – which surely has been viewed through rose-tinted spectacles for the past few years? And within those seven years the price of the tasting menu had doubled – would it still be worth it?

The winemonkeys and the Fat Duck

I should not have worried. Once again, on entering through the discreet wooden door, you step – not into a normal restaurant, but instead fall down the rabbit hole into the world of the Fat Duck. A world where your gin and tonic isn’t served in a glass but is frozen with liquid nitrogen and given to you as a spoon-sized ball, perfect to pop in your mouth where it sublimes to leave an incredible freshness of flavour: the perfect palate cleanser. A world where you are given a gold watch to put into a teapot of hot water where it dissolves into a gold-flecked consommé ready to be eaten. A world where candles can be lit and then eaten and where even Lenka eats snails. I won’t go into detail about the many courses we ate, for I fear I could not do them the justice they require – but have a look through the photos below, and if you want to know more then you’ll have to make a booking and go down the rabbit hole yourself. 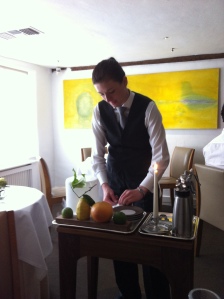 However, I do feel that I should touch on the wines we drank as we are the winemonkeys afterall. “Would you like a glass of champagne?” – one of those questions that has just the one answer: yes. And so Rémi presented us with our first wine of the lunch – Moët 2002 – which was just perfect as we perused the tome that is their wine list. When you are wine geeks like us choosing from a wine list like that is a lot of fun but also takes quite a long time. We were nearing the last drops of our Moët when we finally came to a decision on two bottles that would fit both our budget and also (hopefully) give a good crack at matching some of the many and diverse dishes ahead.

First up was the Smaragd Riesling Steinertal 2002 from F.X. Pichler in Wachau, Austria. ‘Smaragd’ refers to the top level of the local classification system in Wachau, where the grapes are picked late so the wines tend to be quite rich and deep in style but also dry. It proved to be a real star, matching many of our first few dishes – and particularly with the savoury edge to the wine beautifully complementing the dish of jelly of quail and crayfish cream served with truffle toast and oak moss.

Following the Riesling we were due to move on to our red wine, Jasmin Côte Rôtie 1999, but Isa – the Head Sommelier – kindly presented us with a wine specifically to match the ‘Mad Hatter’s Tea Party’ mock turtle soup instead. This turned out to be a sherry, La Bota Amontillado, and for me it was the best match of the meal. The nutty, savoury Amontillado coped tremendously with the varying flavours and textures of the mock turtle soup and accompanying toast sandwiches. It also proved that the right wine match can really lift a dish up to another level: the whole is better than the sum of the parts. Sherry is so wonderfully food-friendly, and for all you sherry-phobics out there, I challenge you to try this match and not get it.

The Côte Rôtie had a hard act to follow after that sherry but proved a lovely, if rather more predictable, match to the beautifully tender lamb dish. And then – just when we were thinking that maybe we should have also considered a sweet wine – Rémi appeared with a half bottle of Simčič Leonardo – a sweet wine from Slovenia made from the Ribolla grape variety where the grapes were dried for 6 months to concentrate them before pressing and fermentation (this is the passito meth od of sweet wine production). A delectably sweet wine to end on, and a particularly lovely

Verjus in egg with Simcic Leonardo

Whilst this is getting on to be quite a long blog, I don’t think it right to end without mentioning the other star of the meal beyond the food and wine: the staff. I cannot emphasise enough how fantastic they all were, the service was so slick and everyone was so friendly and enthusiastic. Julien, the junior assistant restaurant manager who served us, was particularly fun and knew just the right way to banter with us – variously convincing Alex that they grow tiny mushrooms by planting seeds directly in the mock egg in the turtle soup dish, and persuading Lenka to eat a snail. So, thank you to the whole team at The Fat Duck for making our lunch one we will surely never forget. I hope its less than 7 years before I get to go again!

The monkeys with our friend Remi

This entry was posted on Monday, July 22nd, 2013 at 3:58 pm and tagged with Côte-Rôtie AOC, Emma, F.X. Pichler, sherry, The Fat Duck, wine and posted in Food, wine tasting. You can follow any responses to this entry through the RSS 2.0 feed.
« A tale of Purley wine (Part 1)
New Fizz-Kid on the Block – Billecart-Salmon Sous Bois gets the wine monkey treatment. »