Celebrating 30th birthdays with a clutch of 1983 wines

This year I celebrated the big 3-0. Whilst for me 1983 was obviously a very important year, in wine terms it was a middling year, with some good wines made in many regions but without the greatness of, say, Alex’s 1982 vintage – hailed as one of the best in Bordeaux. 1983 was, however, a widely declared year for vintage port – something my siblings cottoned onto when they bought me a (delicious) bottle of Grahams 1983 for my 21st birthday.

A few years ago when I was working at The Sampler I realised this milestone of turning 30 was ahead and thought how nice it would be to squirrel away a few bottles of 1983 to celebrate my birthday. If you don’t know The Sampler, it’s a great independent merchant in London which generally has good stocks of older vintages of wine, sourced from private cellars, auctions and the like. So as 1983 wines appeared I would buy the odd bottle and put it to the bottom of my wine rack to keep until 2013 rolled around. Added to this my Dad kindly offered a few bottles out of his cellar so soon enough I had 7 bottles covering white, red, sweet and port. Enough for a good party.

Perhaps unsurprisingly, quite a few of my friends turned 30 this year too and as we were all heading out to the Douro in Portugal for a group holiday this summer I suggested bringing the bottles along and all celebrating together. Which is what we did, carefully packing the wines into polystyrene tubes in our suitcases so our precious cargo would arrive safe and sound.

And so on the Saturday night of our holiday we all chipped in to produce a delicious 4 course dinner and open the wines. In tasting order we had: 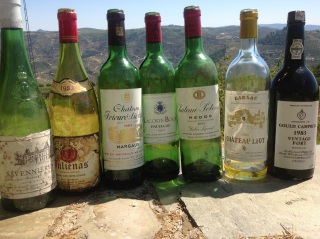 First up was the white, served with some home-cured salmon. Savennieres is a region in the Loire Valley of France which produces white wine from Chenin Blanc. Whilst it is known for its age-worthiness and I have had lovely examples at 10-15 years old, I have to admit to being prepared for this to be completely past it. But I am happy to report it was still going strong. There were certainly some savoury mushroom notes hinting at the age, but these were underpinned by vibrant acidity and even some lingering citrus fruit and honey character. A real surprise, just wish I had another bottle!

Next up was the Beaujolais. Again I had real doubts about this wine being drinkable –Beaujolais is usually drunk whilst young and fruity and whilst it can age and develop almost Pinot Noir-like earthy aromas, 30 years was surely pushing it. It wasn’t quite the surprise that the Savennieres was, most of the fruit had indeed faded, leaving the acidity a little clunky and out of balance. But, it was far from undrinkable and still possessed some elegance. Overall an interesting wine to taste, but not one anyone went back to.

The trio of Bordeaux came next, nicely matched by Beef Wellington wrapped in parma ham rather than pastry. The Prieure Lichine certainly had the elegance you’d expect of Margaux, but I felt that it didn’t have the tannins to quite hold up to 30 years of age. It still had some pretty fruit but finished rather short. Enjoyable enough to drink, but not to savour. The next two pretty much split the table for top red of the night. For me the Lacoste Borie pipped the Potensac to the post. The Potensac probably had more lingering fruit – on the front palate there was still a lot of blackcurrant fruit, pretty impressive for a 30 year old wine. However, after this burst of fruit it became a bit bitter and finished quite abruptly. The Lacoste Borie had a lovely mix of more evolved savoury fruit and earth notes and fine tannins and was the one I went back to.

Onto the pudding course – which was actually a very fresh summer pudding and not the greatest match with Barsac so we enjoyed the pudding and then had the wine separately.  Bright gold in colour with honey, marmalade and mushroom notes and bright acidity to balance the sweetness, really all you could want in a pudding wine. A winner for everyone.

Then finally onto the port which we had carefully decanted earlier in the day. Surprisingly perhaps this was the only cork to crumble as we pulled it out, a butlers thief sadly not to hand. You’d think in the home of cork forests that the port would have the best cork of the bunch, but sadly not. Whilst it seemed a bit crazy to bring port to the Douro, it was lovely drinking the wine in the region where it was produced many years before. Velvet textured with layers of dark raisin fruit, savoury earth and spice notes and that warming feeling of port. Delicious and a superb end to a great meal.

Guess I better start collecting wine for our 40ths soon…

This entry was posted on Friday, August 23rd, 2013 at 2:21 pm and tagged with 1983, Beaujolais, Bordeaux, Chenin Blanc, Douro, Emma, Port, Portugal, Sauternes, Savennieres, vintage, wine and posted in Food, Travel, Wine region, wine tasting. You can follow any responses to this entry through the RSS 2.0 feed.
« Obscure varieties, anyone?
Is drinking alone sinful or saintly? »