My first impressions of the Yarra Valley were of lush greenness and rolling hills. Think of the Shire and you won’t be far off. I wasn’t quite prepared for how pretty it is with the larger mountains surrounding, the regimented vineyards on the lower slopes and cows and sheep grazing in the fields of the plains. But we weren’t here for the view, pretty as it is, but for the wines. 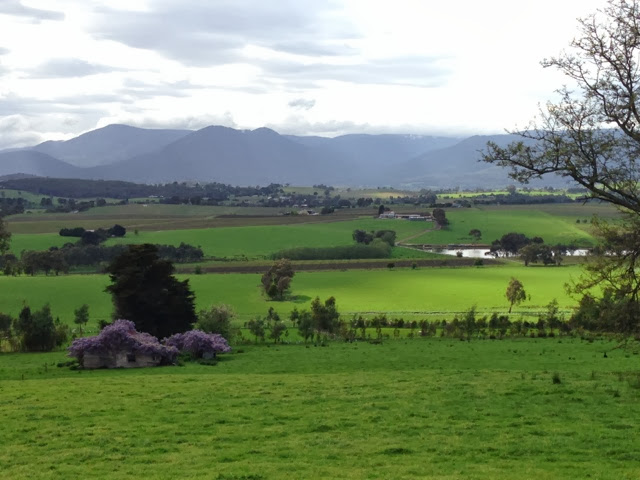 Yarra is renowned for its Chardonnay and Pinot Noir but in the last 5 or so years these wines have both gone through some stylistic changes – with Chardonnay winemakers flirting with (or in some cases having a full-on affair with) reductive aromas and Pinot Noir makers experimenting with whole bunch winemaking. The issue of reductive flavours in Chardonnay particularly cropped up throughout our tastings and created lots of interesting debate both between winemakers and between my guests.

As any high school chemistry student will tell you, reduction is the opposite of oxidation. In chemical terms reduction occurs when a molecule, atom or ion gains an electron – and is always balanced by the opposite reaction: oxidation, which is the loss of an electron.

Whilst this is also true of wine, in wine tasting terms these words are used to describe a certain variety of flavours. In the case of reduction, at the lesser end of the scale aromas such as flinty or matchstick are called reductive – I also often detect this by a slight prickle at the back of the nose. Or to put it the Aussie way, as quoted by Tim, the winemaker from Giant Steps: “it’s like smelling your own farts and that slight pleasure you get from that”!

This then runs the whole gamut through to full-on reduction with really quite stinky rotten egg and cooked cabbage notes: a faulty wine. The level at which a reductive wine (showing these matchstick characters but them adding complexity and not dominating the wine) becomes a reduced wine (where these characters dominate and render the wine unappealing) is a completely personal one, hence the amount of heated debate that arose.

Until just a few years ago Chardonnay winemaking in the Yarra proceeded much as in the rest of Australia, and indeed in much of the rest of the world. The cool climate gave the bright acidity but the style was geared towards the soft peachy fruit character of the region. In no way the big, blowsy Chardonnay of yester-year, but also quite different to the more linear style of today. It now seems unclear where the trend towards more reductive styles started, but is likely partly due to young winemakers increasingly doing a vintage in Burgundy and being influenced by styles there and also due to the inherent interest in experimentation that Aussie winemakers have.

At least, that is the idea. The reality is probably a little more mixed.

For sure there are those wines that get the mix between fruit roundness, acid zest and just a touch of reductive aromas bang on, and these are truly exciting wines and world-class Chardonnays. However, there are also those wines where the reductive notes overwhelm the fruit and edge into the realm of faulty reduction. I found this, perhaps surprisingly, a particular problem at the lower end of the scale for some wineries where the fruit just didn’t have enough concentration to balance the what-seemed-to-be house style of intense reductive aromas.

The other issue that came out of the tastings was with some wines acid-fruit balance where the quest for leanness and restraint seemed to have edged worryingly into hard green acidity rather than zesty lemon acidity. This seemed a particular issue for the cool 2011 vintage. Interestingly, many of these wines hadn’t gone through malolactic fermentation which would have softened this harsh green acidity.

Darren, winemaker at Yering Station, said this was because they get such high malic:tartaric acid ratios in the juice that MLF gives too high diacetyl characters to the wine – adding too high a level of popcorn-style aromas: not something he wants in his wines. However, if you compare this to Chablis which has the same high malic acid issue, those wines routinely go through MLF and do not show these aromas – so I wonder if it is more a case of them not using/having access to the right bacteria to inoculate with to manage diacetyl levels, or just not managing their MLF right. At any rate some of these very lean wines could do with a little more fruit ripeness to balance this firm acidity.

But for all that, tasting these wines really showed what the Yarra Valley is doing with Chardonnay these days. Listening to the winemakers and understanding their desire to keep perfecting their wines, experimenting and creating new styles is exciting and could be easily seen in the Chardonnays we tasted. And as a winemonkey, the best tastings are those that create debate and where some people like some wines and not others and vice versa. Everyone has different palates and so everyone has different preferences and tastes – and discussing these tastes is part of the fun of enjoying wine.

Oakridge Over the Shoulder 2012

Of these, my particular favourites were the mac forbes, De Bortoli Reserve, Giant Steps Arthur’s Creek and Phi (which handily for me are all available in the UK) – but there were certainly people in the group who would argue for other top picks, so my suggestion would be to get out there and grab a bottle to see for yourself.

Disclaimer: One of the great treats of working for Wine Australia is that every so often I get to lead a trip to Australia taking a group of trade and media around some of the wine regions. Sadly this time I wasn’t able to squirrel along either of my fellow monkeys to join me, so it is solely up to me to coalesce some of my thoughts and feelings for the regions into a readable blog post. So, whilst I am here for my job, this is very much me writing as me and not as a Wine Australia employee.

This entry was posted on Wednesday, September 25th, 2013 at 9:41 am and tagged with Australia, Chardonnay, Emma, Pinot Noir, wine, Yarra Valley and posted in Travel, Wine region, wine tasting. You can follow any responses to this entry through the RSS 2.0 feed.
« Is drinking alone sinful or saintly?
The magic of old vines – one for the geeks »