For the love of Grenache

There is only so much about a subject you can learn from reading books and looking at photos. To really understand something you have to live it, see it, talk to the people in the know. Not only does that you give you a deeper understanding, it also helps you to focus your own opinion on the subject, rather than repeating what you heard from someone else.

Having just spent 3 weeks in Australia taking two groups of wine trade around a number of different wine regions I could see this effect happening in real time. Each group left not only with a deeper understanding of Australia, the wine regions and the wines themselves – but also with their own individual perspective on Australian wine.

It is perhaps not surprising that visiting a wine region fosters a deeper affection for its wines. Not only does it give you a mental picture of where the grapes were grown and made, of the soil and climate – it also gives you access to many of the winemakers and through them you hear very personal stories of their land and wines. That’s a powerful connection. And so a shift in perception of Australian wines in the groups was not a surprise – I know just how great the wines are, and how underrated they can be. Still, it was interesting to me to see that the variety that caused the most interest from both groups wasn’t the cool-climate Pinot Noir or Chardonnay that you might perhaps have expected – or even the exciting new wines produced from more alternative varieties such as Touriga Nacional, Fiano or Vermentino. Instead, it was Grenache that opened everyone’s eyes and excited their taste buds. 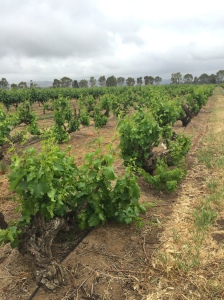 Grenache was one of the very first varieties planted in Australia, brought over by horticulturalist James Busby in the early 1800s. Indeed, the oldest Grenache vineyard in the world – planted in 1850 – is located in the Barossa and still produces wine today. In the early days Grenache was used to make fortified wines that were so popular at the time and production only really shifted to table wine after the end of World War Two. But for a long time Grenache was overshadowed by its bigger brother Shiraz and became the forgotten sibling. Winemakers freely admit to not giving Grenache the attention it deserved for a long time. Instead they treated it much like any other red wine, resulting in very little varietal character.

I think the reason that everyone was so excited about Grenache was that it challenged all of their pre-conceived ideas. Rather than being the big powerful oak bomb that perhaps they expected with lashings of rich, ripe fruit – instead the wines we tasted were fresh, graceful and elegant with real fragrance and finesse. More like a Pinot Noir than a Shiraz.

More recently winemakers have come to understand Grenache and in their own words are “giving it more love”. Grapes are now picked earlier to retain acidity and the fresh red fruit characters. Often a portion of whole bunches are used during fermentation to accentuate the fragrance of the wine and give extra structure, and little or no new oak is used, with a move to ageing in large format oak vats and barrels rather than in barriques.

All these changes have completely shifted the style of Grenache and winemakers often refer to it as “blue collar Pinot Noir” or “warm climate Pinot Noir” – with one winemaker even going so far as commenting “Grenache delivers what Pinot Noir promises”. Big words, but given the value for money of Grenache versus the often high prices of Pinot Noir I am inclined not to disagree. Words like ‘mid-weight’, ‘fresh’, ‘vibrant red fruit’ and ‘crunchy’ litter my tasting notes but perhaps don’t quite convey just how drinkable these wines are. No more the wines of old (and of many Grenache still made elsewhere in the world) that you could perhaps finish a glass of but not a bottle – instead these leave you reaching for the bottle and surprised when you find it empty. Wines that lift you up rather than send you to sleep.

Now, I am not saying that all Aussie Grenache is like this – there is still some made in the more old-fashioned style – but this fresh style is becoming more and more common. These are wines that you see listed by the glass in any self-respecting hipster bar or even neighbourhood restaurant in Melbourne, Sydney and Adelaide – but it seems that the rest of the world is lagging behind. Indeed, one producer commented to me that during a recent visit to London no one wanted to taste their Grenache – all anyone wanted to taste was their more up-and-coming Fiano and Tempranillo.

Sometimes it can seem easier to chase the new and exciting rather than challenge your preconceived ideas about something you think you know. Do so at your peril – you may just be missing out on an even more exciting find.

I’ll finish with a little quote from Canadian journalist Michelle Bouffard who joined me in Australia:

“I didn’t think I liked Grenache. Australia made me love Grenache.”

In case you want to hunt out some new wave Aussie Grenache for yourself, here are just a few wines that are well worth tasting: