It is fair to say that men dominated the wine industry for the majority of the 20th century. With a few notable exceptions, wines were made by men at wineries owned by men, imported by men and sold by men. Even the MWs were all men – the first male MWs passed their exams in 1953 but it wasn’t until 1970 that the first woman, Sarah Morphew Stephen MW, joined their ranks. But of course times have changed and now whilst only 33% of all MWs are women, a full 48% of MW students are female – just one sign of the increasing numbers of women working in the wine industry.

This increase in numbers has been followed by a move in various parts of the wine industry to focus specifically on the achievements of women – both as a way to celebrate women working in the wine and also to encourage more women to join their ranks. In the last decade we have seen the first wine producing company owned, controlled and managed by women, founded in South Africa in 2006; the first wine competition judged solely by women, founded in USA in 2007 and the first global Women in Wine Symposium, held in Napa in 2015. Closer to home, a group of women working in the industry in London formed a collaborative networking group in 2016 called Women in Wine LDN.

It is against this backdrop that Lenka and I presented a masterclass in Prague recently entitled ‘Women in Wine’. Although Czech is perhaps a bit behind other countries in terms of the number of women working in wine, it was wonderful to talk to a room full of women, many of whom worked in the local industry, and to highlight the achievements of a small selection of female winemakers from around the world. We chose six wines to present from wineries in five different countries – and the link connecting all of the wines was the incredible women who helped to make them.

First up was Petra Unger’s Oberfeld Alte Reben  Grüner Veltliner 2014 from Kremstal in Austria. Petra took over the running of the estate from her parent’s in 1999 and quietly produces deliciously drinkable wines. Indeed this wine was a real showcase for classic Grüner with those spicy white pepper notes that can often be so hard to find. Petra is also a member of the marketing cooperative ’11 Frauen’ – a group of the top 11 female winemakers in Austria who work together to help increase their profiles globally. Another example of an increased focus on women in wine – and something that would have been hard to imagine happening a couple of decades ago.

The second wine took us from Austria to Argentina, with Catena Chardonnay 2014. Here the focus was on Laura Catena, a truly inspirational woman in wine by anyone’s judgement. Although born into a winemaking family, Laura decided to follow her own dream and study medicine, becoming an emergency doctor working in California. It wasn’t until she stood in for her father at a tasting in 1999 that she realised she could help to give Argentina and its wines the kickstart they needed on the world stage. This took her back to Mendoza where she founded the Catena Institute of Wine – a research body focusing on viticulture. With the scientific rigor Laura applied to the work they do, the Institute is now a world-class research body. Laura has also written a book on the history and future of Argentinian wine and now splits her time between working as a doctor in San Francisco and at the winery in Mendoza where she tastes and approves all wines before release. Oh, and she is also a mother to three children. Hats off. The Chardonnay itself showed that typical Argentinian character of ripe tropical fruit combined with bright acidity from the high altitude vineyards (here between 900-1400m above sea level) all neatly woven with some well-judged oak character giving a nutty, mealy texture.

We showed the third and fourth wines together as they came from the same winery, Lopez de Heredia in Rioja. The bastion of traditional-style Rioja, Lopez de Heredia wines surely can’t have changed much in terms of winemaking or style since the winery was founded in 1877. Today it is run by Maria José, the great-granddaughter of the founder, alongside her sister Mercedes. Maria José is not only responsible for making these unique wines but also acts as the winery’s ambassador, travelling the world to talk about her family and their wines. She is an incredible asset to Rioja as a whole and never fails to have a story (or ten!) to tell. As for the wines, first up we showed the Lopez de Heredia Gravonia Crianza 2005 – and yes, that’s the current vintage. 100% Viura aged for 4 years in barrel – a style that used to be common in Rioja, but now is unique to Lopez de Heredia. We showed the wines blind and one of the women suggested that this might come from Jerez and in some ways it is like an unfortified dry sherry – savoury with notes of salty almonds and lemon pith. Whilst the Grüner earlier had been a ‘drinking’ wine, this was most definitely a ‘thinking’ wine. As for the red, we showed Lopez de Heredia Cubillo 2007 – a blend of 65% Tempranillo, 25% Garnacha and the remainder a mix of Graciano and Mazuelo. It showed true Tempranillo character – full of red fruits with a herbal undertone, pretty impressive for a 9 year old humble Crianza.

The second red took us from the traditional to the alternative: Occhipinti Nero d’Avola Siccagno 2013 from Sicily. Like Laura Catena, Arianna Occhipinti is from a famous winemaking family – her uncle is Giusto Occhipinti who owns COS in Sicily. However, she has forged her own path, making wines under her own eponymous label.  Arianna made her first wine in 2004 at age 22 from a mere 1ha of abandoned vines and quickly rose to prominence in the natural wine scene for making elegant, perfumed wines quite different to mainstream Sicilian styles. She now owns just over 23ha of vineyards and makes wines that in her own words are a “mirror of the place”. This wine was a real eye-opener for many of the attendees, being very different to what they expected from Sicily. Like me they really enjoyed the delicate style and it was a big hit on the night.

To finish we presented Wynns Reserve Shiraz 1999 from Coonawarra, Australia. I have to admit to being a little nervous about this wine when we tasted it – at 17 years old would it still be holding up ok? – but in the end it turned out to be the wine of the night for many of us. Classic Coonawarra in style: medium bodied with lingering red fruit notes, spice and pepper and that cigar-box aged Aussie Shiraz note. Not only holding up, this was really delicious and showed just how well Aussie wines can age. The woman behind the wine is Sue Hodder and whilst she is perhaps not quite as widely known as some of Australia’s other female winemakers, that is more down to her quiet, thoughtful personality than anything else. She is in fact one of the most highly respected winemakers in Australia and won the prestigious Winemaker of the Year award in 2010 (awarded jointly to her and Wynn’s Chief Viticulturist Allen Jenkins). 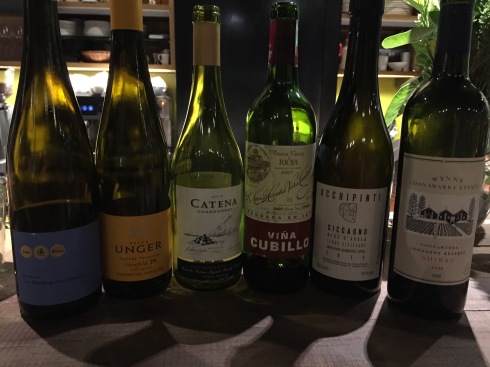 All in all it was a privilege to present these six wines and to talk about the amazing women behind them. Of course the very act of focusing on wines made by women raises the question as to whether female winemakers make wines in different styles to men. It may be tempting to generalise that female winemakers make more elegant, delicate wines and male winemakers make bigger, more intense wines. You could even hypothesise that the current trend towards lighter, fresher styles of wine coincides with the increasing number of female winemakers globally. However, as with any sweeping statement, this ignores the many winemakers who are making the ‘other’ style of wine (be they female or male) and in my opinion does nothing to help foster equality. Rather than focusing on women as being something ‘different’, let’s just focus on the wines they make.

My hope is that in another decade or two the thought of hosting a masterclass on women in wine wouldn’t cross anyone’s mind for the simple reason that there is nothing unusual about being a women in wine.

This entry was posted on Tuesday, August 30th, 2016 at 10:20 am and tagged with Argentina, Australia, Austria, Catena, Chardonnay, Czech, Emma, Gruner Veltliner, Lopez de Heredia, Occhipinti, Rioja, Shiraz, Sicily, Women in wine, Wynns and posted in Wine, wine tasting, Winemaking. You can follow any responses to this entry through the RSS 2.0 feed.
« The Coravin Revolution finally reaches the Tilling house
The Golden Age of Australian Chardonnay? »

4 responses to “Women in Wine”