Recently I was invited to come down to sunny Languedoc and spend a weekend celebrating harvest with Gerard Bertrand and his crew. And 299 others, mostly journalists, bloggers and importers from 14 different countries (though the majority came from the US; clearly the biggest market for Gerard’s wines). An organisational challenge but one that was met and executed brilliantly.

This is only the second time that I have visited the Languedoc; the first was about 6 years ago and involved far too much driving to and from wineries. It is not a small place after all. The Sud de France, which includes Languedoc-Roussillon, claims the largest surface area under vine in France but also the highest concentration of organic vineyards. 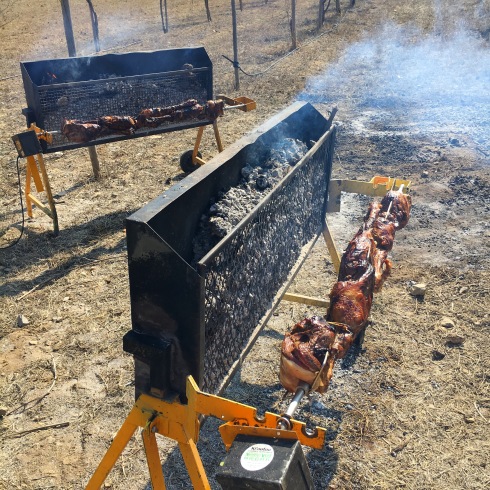 Organics and, more importantly, biodynamics play centre stage in Gerard Bertrand’s operation. The former rugby player swears by homeopathy and his philosophy extends into the vineyard. At 500 ha, Gerard’s are the biggest biodynamically farmed estates in France, if not the world. Biodynamics is one of those subjects that causes controversy and debate. I have no doubt that it works because I have tasted the positive results many times. Though I, like many, also believe that what gives these great results is not just the rigorous application of preparations and processes in line with the biodynamic calendar but also all the extra time that invariably has to be spent in the vineyard. 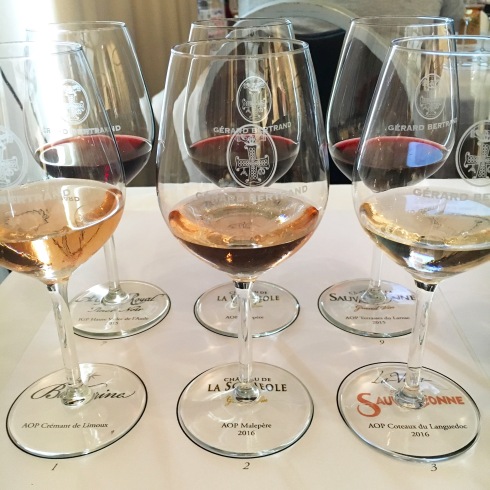 On day one we were treated to a tasting of 13 wines from the various estates, led by one of the winemakers, Stephane. In fact there were two tastings, one organised for the European group and one for the Americans, each showing wines deemed stylistically appropriate for each market, i.e. we got the more elegant ones and the US crowd the sweeter, bigger wines. I thought this was really clever and showed Gerard’s commercial aptitude. This (European) tasting helped to highlight the definite style of Gerard’s wines and what he is trying to achieve. Gerard is, as Stephane put it “looking to translate the sunshine of the Languedoc into the wine”. He wants very smooth and soft tannins in his reds. In the vineyard it was clear to see that he is pushing for sur-maturite and the style of wines reflects this – they are plush, velvety and without rough edges. But they also show a sense of place, none more than his top estate and wine, Clos d’Ora, which we visited on day two.

Clos d’Ora is a stunning estate in Minervois La Liviniere. It was first discovered relatively recently in 1997. Back then, it was planted just to Carignan, now 60-70yr old. The place is so serene, Gerard comes here sometimes to meditate. The lovely smell of garrigue follows you around the 8 plots (9ha in total). Here you will find two distinct microclimates – the south-eastern side is affected by sea wind and has mostly marl soils. The north-west side is cooler and drier with continental influence and hard limestone soils. The estate is planted mostly to Carignan, Syrah, Grenache and Mourvèdre. Mourvèdre lives on stone terrasses where it can get the sun and long ripening time it needs, whilst Carignan is planted just below. The Carignan grape bunches are kept a little shaded as this variety is prone to sunburn. When we visited it was a root day (and therefore time dedicated to working the soil) and viticulturist Nicolas was busy tilling the soil with the help of his mule ‘Victorieux’ and his lovely, if a little shy dog Link.

The first vintage of Clos d’Ora was 2012 so it is a relatively young wine. Over the weekend we were treated to a vertical of 2012-2015. These were undoubtedly the best wines of the trip with a clear sense of place and that classic black olive, reglisse and wild thyme character but also those very soft, velvety tannins that Gerard is so fond of.

This entry was posted on Thursday, September 28th, 2017 at 2:00 pm and tagged with biodynamics, GerardBetrand, harvest, Languedoc, Lenka, organic, Vineyard, vintage, wine and posted in Travel, Uncategorized, Wine region, wine tasting. You can follow any responses to this entry through the RSS 2.0 feed.
« If music be the wine of love, drink up! (sorry Willi. S)
The importance of being inspired »