Wine shows (aka competitions) are an important part of the wine scene in Australia and operate on a number of levels. There are the big national shows such as the Sydney Royal Wine Show, then there are state shows such as the Wine Show of Western Australia and then there are also smaller regional shows. Beyond that there are specific shows for different categories of wine, such as the Alternative Varieties Show and the Cool Climate Wine Show. Wine show judges are, unsurprisingly, predominantly Australian and tend to be winemakers – each of whom will have completed an intensive four day wine assessment course led by the AWRI and have been associate judges for a number of years before progressing to full judge status. It is quite a different process to what happens in other countries and adds real rigour to the judging. Some shows also invite along an international judge to join the panel to add a different perspective. And this year I was invited to be the international judge at the McLaren Vale show – considered to be one of the top regional shows in the country. Lucky me!

So just last week I found myself in the barrel hall at Serafino winery in McLaren Vale with this scene in front of me:

Right, time to get stuck in!

I have judged at a number of wine competitions now, both in the UK and Europe, and have found each varied in terms of set up and method of judging. McLaren Vale was no different. We had three panels of judges, each with a chair judge, two judges and two associate judges (whose scores aren’t necessarily included, but opinions certainly are) and each panel judged around 100 wines a day for two days, with a third day of trophy judging. Throughout each day we’d be given a number of ‘classes’ of wines – say, Shiraz 2016 or younger, Rosé or Grenache dominant blends – which we would taste and score individually at our tables. Then at the end of each class the panel would get together, read out our scores and see where things stood.

Some wines would be easy – either not making the cut at all, or with all of us judging it in the same medal bracket (bronze, silver, gold). Other wines might be more controversial and would require discussion before deciding on an overall score. And for some wines that one or more of us gave a gold medal to, we would call them back and re-taste to come to a consensus. In many ways, this discussion was the most interesting part of the day – we could all learn from each other and with perhaps 25 wines in a class it is possible to ‘miss’ a wine. So, when another judge awarded a wine gold and you didn’t it was good to re-taste to see if you should give it a higher score, or indeed if the other judge was just being a bit generous.

Throughout my two days of judging my panel covered everything from rosé to fortified wine and encompassed all of the major red varieties in the region as well as some of the emerging Mediterranean varieties. It was a wonderful opportunity to really get under the skin of McLaren Vale and learn more about the varying wine styles, sub regional differences and vintage variation. I have written before about my love for Grenache so it was wonderful to see these wines really shining in the show – there’s no doubt in my mind that Grenache is a real star in the region. But throughout the classes I found wines of real interest and varietal typicity with – most importantly – a sense of place. It is that sense of place that made certain wines in all categories stand out during the judging, where winemaking had focused on allowing the bright fruit characters to shine through and not be dominated by either oak or whole bunch influence. I could see the beauty of the region reflected in these wines and hope this focus on the ‘less is more’ style of winemaking continues in the future.

After two days of pretty intensive judging (and teeth that seemingly got ever blacker), the third day of trophy judging was simply great fun. The top golds in various classes were drawn together and then the whole judging panel tasted the wines again to decide the trophies – such as Top White, Best Small Producer, Top Mediterranean red etc etc. Some trophies were easy to decide, whilst others split the room.

The final trophy, the Bushing Trophy, is awarded to best wine of show and we had seven wines to choose between, including a white, five different reds and a fortified. Not an easy decision to make. Although I was pleased that the wine I eventually chose was the one that got the most votes from the other judges too. The Bushing Lunch was held today in the Vale when all of the results were announced – and the Bushing Trophy went to the Kay Brothers Griffon’s Key Grenache 2016. A hugely worthy winner from the oldest winery in the region still in the founding family’s hands.

After all of the trophy judging was done, my fellow judges were able to relax with a refreshing ale. But for me, my work was not yet over – I had one more trophy to award: the International Judge’s Trophy. Suddenly the pressure was on: choosing this particular trophy was my responsibility and mine alone. So I worked back through all of my notes and picked out five wines that had stood out for me during the judging, but which hadn’t been awarded a trophy. And then I had to taste through them all and make my final decision. Easier said than done I can tell you. But after some contemplation it was clear to me that one wine stood out beyond the others and so that is what I gave my trophy to: Graham Stevens Vintage Fortified Shiraz 2017.

My commentary on the wine that was read out at the Bushing Lunch is as follows:

Amongst all the wines I tasted during the show judging, the Stevens Vintage Fortified Shiraz 2017 really stood out for me and so I am hugely pleased to award it the International Judge’s Trophy. For me, this wine reflects not only the rich history of McLaren Vale and fortified wine, but also the future of the region with its beguiling fragrance, bright blue fruited style and utter drinkability. Fortified wines are often overlooked these days, perhaps dismissed for being old fashioned or something your Gran would drink – quite at odds with the crunchy, juicy styles of red wines winning awards around the world. But here is a wine that couldn’t be further from that stereotype. Rather than a wine to fall asleep with in a cosy armchair, this has a vibrancy and energy to it that leaps out of the glass and you certainly don’t need to wait until after dinner to enjoy it. With a wine like this it is clear to me that McLaren Vale’s fortified wines aren’t just a part of the history books – but deserve their place in the future too.

Judging at the McLaren Vale show was a fantastic experience and one that I hugely enjoyed. The competition was brilliantly organised and run – big thanks to Liam and Scott and the rest of the show committee and all the helpers for doing such a wonderful job. I learnt a huge amount about the region and its wines, far more than I could ever have hoped to otherwise. Meeting and talking to my fellow judges was also enlightening and I learnt a lot from them during our discussions, thanks to you all too.

So, to the show committee and the MVGWTA – thank you so much for inviting me to be a part of this wonderful show and to spend time in your beautiful region. I hope it’s not too long before I return.

For a list of the trophy winners and full results of the judging, please see here.

The importance of being inspired

Sitting in an office day after day it is easy to get caught up in a seemingly endless cycle of emails and spreadsheets and to forget about the bigger picture. Certainly no one enters the wine trade for the day to day minutiae of working life – but rather for a joy of wine itself. And every now and then we all need to be reminded of that.

I have just spent ten days travelling around some of Australia’s wine regions with a bunch of UK and Irish independent wine merchants. It’s been a fantastic trip and I will report on it in due course, but for now I just want to express my thanks to everyone we met along the way who shared their time, experience and passion for wine with us. It has certainly filled me with a renewed energy and enthusiasm.

And it’s not just those of us that sit in an office that benefit from a change of scene. Steve Flamsteed, winemaker at Giant Steps in the Yarra Valley, told me about going over to Central Otago to make wine which imbues him with an extra energy – and that he comes back home afterwards buzzing and with a renewed excitement for what he does. And that is exactly how I feel now.

We met so many wonderful people on our travels and to spend some time chatting to them and hearing their stories has been truly inspiring.

Standing in Bernard Smart’s Grenache vineyard in Clarendon in McLaren Vale and hearing about how the oldest vines were planted by his father in 1921, another block was planted by Bernard and his brother in the 1950s and the youngest block was planted by Bernard’s son in 1999 was quite extraordinary. The fact that Bernard at 84 years old is still managing the vineyard himself is just a testament to his family ties to that patch of dirt. 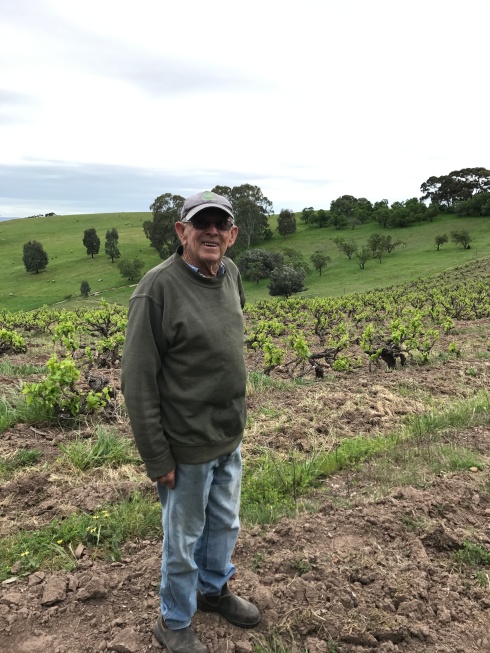 Bernard Smart in his family’s vineyard dating back to 1921

Then there was Ken Helm at Helm winery in Canberra, a true raconteur who had us all in stiches within minutes of arriving – and who taught us the meaning of the word ‘trivia’ alongside tasting his delicious Rieslings. An anecdote that will stay with all of us for a long time to come.

In the King Valley the Dal Zotto family’s hospitality was fabulous. Inviting us along to join in their local salami festival, where father of the family Otto Dal Zotto cooked spit roasted porchetta for the 200 or so guests whilst their wine flowed freely was a special experience and made this bunch of poms feel right at home. The fact that we got thrashed by a bunch of aussie kids in a post-lunch cricket match should perhaps be glossed over though.

And then up in the Adelaide Hills we had another long lunch with the Basket Range producers and their various low intervention/natural/organic wines. Of course that’s just one side of the incredibly diverse story of the Hills, but again it was the generosity and back to basics nature of the crowd that struck a cord.

As Steve so eloquently expressed to me, having time out in the vineyards and talking to so may different characters I now feel a renewed energy and excitement – and suspect the rest of the group would say the same. So, I have to say a huge thanks to all of the wonderful winemakers, viticulturists and winery owners we met along the way for reminding us of what a wonderful business we all work in.