Despite studying history at university, Alex’s library was the wine bars of Newcastle, and graduation saw her beating a hasty retreat to the vineyards of South Africa.  What was meant to be a 3 month adventure saw her returning 3 years later with a bad South African accent, a half decent tan and a deeply engrained love of the vineyards (and the biltong).   After spending 6 years roaming the streets of London selling a portfolio of international beauties for Bancroft wines to London’s finest restaurant palates, Alex has changed paths and is now working for Wotwine? and keeps the UK’s wine-lovers up to date with the best wines in the supermarkets.

Alex is the monkey prone to flights of fancy and can either be found joyfully destroying well loved musicals with her tuneless renditions, or describing to bemused friends the human personalities the wine flavours conjure up in her mind. (You’d best pray the two never collide).  It was as much a shock as it was a delight for one such ramble to see her named the 2012 young wine writer of the year.

When not working or waxing lyrical Alex can be found cooped up with the other two monkeys wondering what suicidal urge made her embark upon the master of wine qualification; a true reflection that love and insanity can be one and the same.

In 2012 Alex won the Young Wine Writer of the Year Award. You can read her winning entry here. 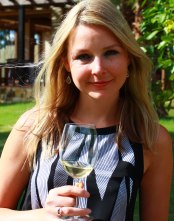 Bohemian by birth and temperament, Lenka is the highly opinionated ‘evil’ monkey. Although she studied Economics in her home country, her intentions were always to do something ‘interesting’ and ‘fun’. Over ten years ago, and through her general love of booze, she happened upon the wine trade and there was no turning back. After completing a stint at independent merchant Theatre of Wine, she turned to marketing and selling the posh stuff on behalf of Fields, Morris & Verdin, a top notch London importer owned by an equally top notch wine merchant, Berry Bros & Rudd.

Since then, Lenka has made wine in Spain (Bierzo, Ribera del Duero and Penedes) and is a regular judge at the International Wine Challenge. She is fond of visiting wine regions on her holidays (to the frustration of her hubby), especially in volcanically active areas.

When she’s not busy climbing volcanoes, Lenka can often be found using the Dark Side of the Force in order to take down her arch nemesis, Sauvignon Bland. She loves waxing lyrical about Burgundy and indulging her obsession with Jamon and all things Spanish.

Lenka became a Master of Wine in early 2016.

Emma’s wine career has seen her variously selling wine to the thirsty mums of Nappy Valley, working as a cellar rat in Marlborough, NZ and tasting some of the best wines in the world at The Sampler in London (Palmer 61, Latour 82 and DRC Grands Echezeaux 71 being notable highlights). She now spends her time working for Wine Australia planning their tastings and events and generally telling the trade and the occasional consumer how great Aussie wine is.

A degree in genetics might not have been the obvious entry into the world of wine but it has certainly helped with the more technical parts of the MW and so Emma is known as the scientific monkey. She was the first monkey to get those hallowed initials after her name.

Emma won the Emerging Wine Writer category in the Louis Roederer Awards 2014 for some of her winemonkey blog posts.